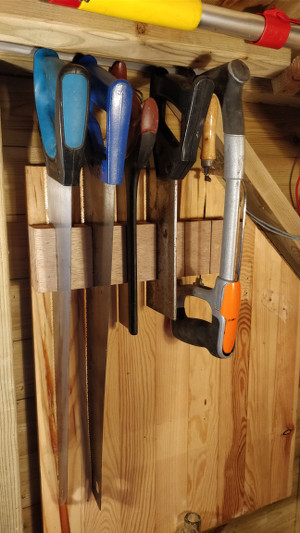 Not entirely sure whether this fits in tools or woodworking, but here goes!

I've always struggled with saw storage in my shed. I've either ended up with systems that stick out a long way and are prone to breaking, or something that is flat, but takes up a lot of width.

While searching for the answer to my problems, I came across this page, which had a very nice idea address my exact problem, so I set out to design a rack which fits the space I have.

This saw rack is essentially a box with wedge-shaped dividers all the way along the box. At the left hand edge of each section is a slot for you to put the saw and in the space left by the wedge on the right is a loose dowel.

As you put the saw into the slot with an upward motion, the dowel is pushed out of the way. Now as you let go of the saw, the slight downward motion due to gravity pulls the dowel back down and locks the saw against the left hand edge.

I've got a gallery toward the bottom of this article, to demonstrate the construction of the rack in case my explanation doesn't make any sense.

I had my doubts about the effectiveness of the system, but decided to set about making it as I could quickly knock it up with offcuts and it wouldn't really matter if it didn't work.

My rack is made of 3.6mm ply on the front and back, with the dividers are made out of some pitch pine that I was given.

The ply on the back is a single piece that extends from one end to the other. In my sketchup plan, I left this longer than the body of the rack so I could mount it. On making the rack, I decided this wasn't necessary as I could mount it from behind.
I found the 3.6mm ply to be a little flexible for this rack. As the front panel is cut into a number of smaller sections, it is only the back panel that is holding the rack together and straight. For me this wasn't a big issue as I was able to screw each divider to the board I hang this on, so the rack benefits from the rigidity of that board.
If I was going to mount it as I had originally planned, with one or two screws at either end and no extra fastenings along the length, I think 12mm ply would be a better option.

I deliberately cut the front and back panels longer than I needed - if I came across any problems gluing the rack up, I could start again a bit further along the panel this way - it's easy to trim them up at the end.

The front panel is cut at the same time and to the same dimensions. Be careful with the height of the board at this point as you'll want it to be reasonably close to the width of the board you use for the dividers, to avoid extra work later on.

Next, I marked out the dividers on one piece of board. I don't have the exact dimensions here, but they don't really matter - it's somewhere between 75-100mm wide and approx 40mm deep.

I have a picture of the layout for the cuts in the gallery too, demonstrating that you can reduce waste and the number of cuts by alternating the orientation of each wedge on the board - be careful to take the saw kerf into consideration here, although it is just a storage rack, so nothing needs to be particularly accurate.

Working from left to right, the first divider - or end piece needs to be a cuboid. I made it 20mm across, which gives plenty of surface area for gluing and fixing.
The next pieces are all 15mm across the shortest edge and I drew the angle at around 20 degrees. That will set the length of the opposite edge. I decided on 20 degrees as it gave quite a steep angle for the dowel to lock as quickly as possible, without it taking up too much space along the length of the rack. I decided on 15mm as the short edge at the top of the wedge as, again, it should give adequate gluing surface and plenty of space for fixing, taking the angled edge into account.

Although the drawing shows enough capacity for 8 saws, my rack holds 6 as it was a better use of space for me. This rack can be as short or as long as you need it to be.

After cutting all of the dividers, I used a block plane on the end grain to smooth it and give the rack the best chance of gripping the saw due to high surface area. If this edge was rough, I was concerned that it might grip less due to less wood being in contact with the saw blade.
I didn't go wild on this - again, it's just a "shop project", so there was some tear out from sawing and a couple of tears from planing too far, but the wedges are going to be hidden. The most important part is that the 90 degree edges are flat and square, to hold the saw nicely.

After cutting and preparing all of the pieces, I laid it out on the backing panel - at this point it didn't matter too much to me which was the backing panel. I could have turned the rack around and mounted it the other way using what became the front panel as the back panel.

I left 4mm between each divider at the bottom and made sure the 90 degree edge was square with the back panel. Once I was confident in my layout, I glued each divider in place and held them temporarily with spring clamps while I got ready to add the front panel.

The front panel is where you have to be careful, but pretty quick working. Unless you allow the glue to fully dry before moving onto the front panel, you'll need to be careful not to let the dividers move when you take the spring clamps off. I left it for about 15 minutes with some quick set PVA - it was by no means set, but it allowed a bit of resistance to movement.

I glued the front panel on as square as possible held it with the spring clamps for 10-15 minutes and then fired some nails in from the front and back (being careful to hit the dividers!) to hold it properly while the glue dried.
I was struggling to get the spring clamps to hold evenly across the height of the rack, so the nails held it more securely while the glue dried.

I used my nail gun for that - I don't think I'd have attempted it with wet glue if I was using panel pins and a hammer. 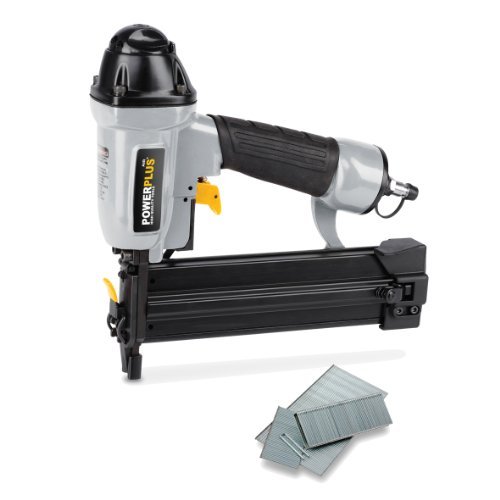 And there I left it overnight to allow the glue to set.

Coming back the next day, I trimmed down the front and back panels to the length of the rack dividers. I then took a bench plane and carefully planed the top and bottom of the rack to get it square and flat.
Using the block plane, I also tidied up the ends of the rack - being careful not to plane all the way across to avoid splitting the fibres at the end. Just work from both sides and it'll clean up nicely.

Finally, it was time to saw the slots for the saws.

I made this over complicated by cutting slots with the saw that I intended to store in that slot. My theory was that this would hold the saw tighter. In reality it's not necessary and if anything makes it harder to store the saw as the slot really needs to be a bit wider than the saw.
If I did it again, I'd cut all of the slots with my widest saw. That way I'd only need to open out one or two of the slots with sand paper. Be careful to keep the slot in line with the 90 degree edge of each divider and it should be flush with that divider - if the front panel over hangs this edge, the saw isn't going to get enough purchase on the divider to hold it properly. Also, you'll not want to cut into the back panel - in reality this is going to get scuffed up over time unless you store your saws with the blade out (which you won't be able to do with your tenon/dovetail saws anyway), so don't obsess over it.

Because of this, I had to go along with some sandpaper to open each slot out - even now some slots a little tight, but I can address this in the future.

I had some dowel left from some old garden chairs - it's approx. 20mm in diameter and this seems to work pretty much perfectly. I didn't take much time to ensure that the cuts were square with the edge - they are close, but the dowel is shorter than the depth of the hole that it is to drop in (the gap between the front and back panel) so it can move freely in there.

As you can see, my rack holds all sorts of saws - Even coping saws and hacksaws. The grip isn't as good on these smaller blades as the blade doesn't hold the dowel parallel as well.

I'm really pleased with how well it works - it causes a problem with my slight OCD as my saws often aren't all lined up properly with regards to height, but you could spend hours getting that right every time you use it. There are more important things!

You can store the saws with the handles at the top or bottom - so this could be mounted up high if you want to make the most of a high wall. It works just as well with saws in either orientation.

I'd seriously suggest giving this a try - it is nice and compact and holds really well.