I was a heavy user of Windows Media Center, but with support for that coming to an end, I've managed to put together a system that meets and goes beyond the capabilities of Media Center.

My replacement uses 4 applications to meet my exact requirements and they can be seen in this simple flowchart: 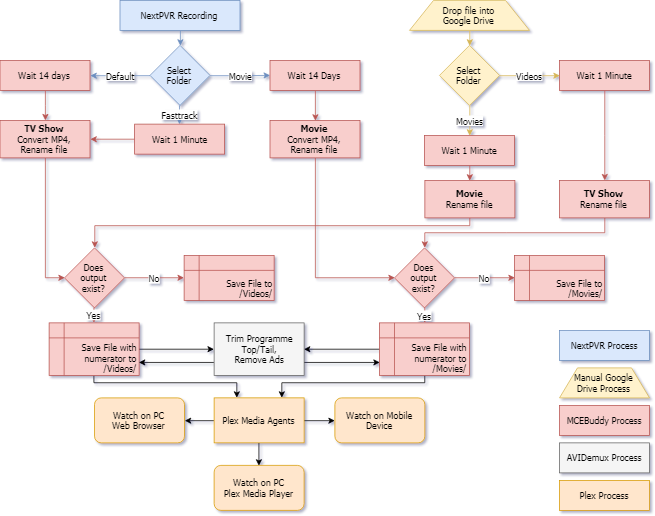 The articles in this section take you through all of the above in varying amounts of detail!

I installed Plex a little while ago when I wanted to access my music using DLNA on my AV Receiver and Windows Media Player's implementation was just too slow and not up to the job.
I got Plex installed, libraries discovered and I was up and running with a fast and reliable server pretty much straight away.

Since then, I've moved my TV recording onto NextPVR, with MCE Buddy archiving recordings to MP4 as mentioned in previous articles and Plex just handles this without any major complications.
On top of simple set up and configuration, it ticks all of my boxes for Media Server requirements - it looks good, I have remote access and more recently (and pretty critically), there's an Alexa skill that allows me to play music directly to my Echo devices.

So I was one of the smart ones who saw the potential in Windows Media Center back in the days of Windows XP. At that point, it met all of my requirements straight out of the box - I could record TV, search the EPG, manage music, video and photos. It was also a little bit portable - I could at least access it all via my Xbox360.

I upgraded to Windows 7 and carried on with the slightly improved Media Center and even paid for the Windows 8 Media Center add on.

And then it all went wrong.

After a few searches and a friend's recommendation, I've settled on NextPVR as my PVR solution.

NextPVR is a good replacement for Media Center in it's entirety. It is able to handle all of the media categories previously handled by Media Center - Photos, Music, Videos, Recorded TV and DVD. It has a good web interface built in and it seems pretty reliable and well supported so far. As with any PVR/freeware solutions, there are some weak points and a few bugs, but nothing insurmountable.

As mentioned in the PVR article, I find the list view of NextPVR harder to use than the grid view that Media Center offered. I also wanted to move a lot of the children's programming and movies out of the recorded TV view so we limited it down to the current recorded programmes or anything within the last two weeks.

Added to this, I had already installed a media server and it would be an advantage for portability if I could convert my TV shows to MP4.